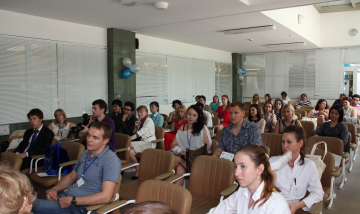 On May 17, the VI International Conference of Young Scientists "Modern Issues of Obstetrics, Gynecology and Perinatology", organized by the Russian National Research Medical University named after N.I. N.I. Pirogova. The conference was chaired by academician of RAMS, doctor of medical sciences, professor, chief consultant in gynecology CLINICS + 31 Savelveva Galina Mikhailovna. The event was attended by young scientists from universities in Ukraine, Belarus, Kazakhstan, Dagestan, as well as representatives of leading medical universities in Russia.

The conference discussed current issues of reproductive health of women, the protection of motherhood and childhood. The problems discussed by young specialists together with leading scientists are aimed at solving urgent problems that are associated with the implementation of the Presidential program “The concept of demographic policy in the Russian Federation for the period until 2025”.

The organizing committee of the International Conference expressed gratitude to Clinic + 31 for supporting the event.