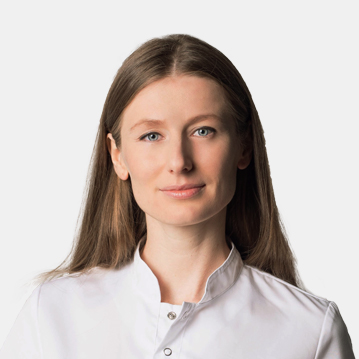 Since 2008 - regular professional development at international symposia and thematic courses. In 2010, the International Conference “Alternative Approaches in Integrated Dental Rehabilitation with the Use of Implants”; lecture and practical course "Anesthesiology and emergency care in outpatient dentistry." In 2012, she took part in the International Conference of the European Federation of Periodontics "Europerio 7" in Vienna. In 2013 - 2014 She completed a course on dental implantology with the Straumann system, attended the scientific seminar “Management of hard and soft tissues”, Straumann Medtech Implant. She participated in lectures at the 4th scientific-practical conference of young scientists “Actual problems of dentistry and maxillofacial surgery” at the Central Research Institute for Surgery and the ChLH, and at the Interregional Scientific-Practical Conference of Dentists “Modern problems of dentistry and ways to solve them”. Course "Innovative treatment concepts to achieve the predictable closure of single or multiple recessions: opportunities and boundaries." Prof. Dr. Anton Sculean. Participated in the practical course "New perspectives of vertical and horizontal augmentation with directed bone regeneration" Phd.Dr. Istvan Urban. Master class by Giovanni Zuckelli "Soft tissue repair in an aesthetically significant area of the oral cavity." Since 2014, an annual visit to the International Quintessence Symposium on Periodontics and Implantology. Course "A paradigm shift in implantology: concepts of working with soft tissues" Nobel Biokear. 2015 - Anniversary Congress of Nobel Biocare. 2016 - course "Immediate implantation with functional load: a systematic approach and a protocol of success." A.Davidyan. Practical course A. Smolyakova "Periosurgery as a way to solve post-implantation problems." 2017 - “Mucogingival surgery around implants.” February A.Yu. 2018 - Course “All-on-4 treatment concept” S. Davidov, Nobel Biocare. 2019 - course "Creating a harmonious contour of soft tissues during implantation in the frontal section." Oscar Gonzalez Martin.